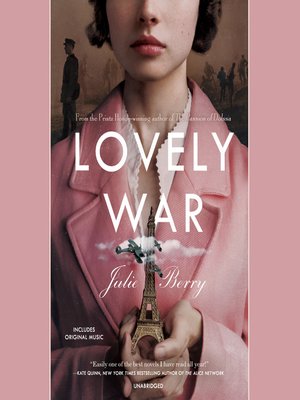 View more libraries...
Read the novel New York Times bestselling author of The Alice Network Kate Quinn called "easily one of the best novels I have read all year!" A critically acclaimed, multi-layered romance set in the perilous days of World Wars I and II, where gods hold the fates—and the hearts—of four mortals in their hands.
They are Hazel, James, Aubrey, and Colette. A classical pianist from London, a British would-be architect-turned-soldier, a Harlem-born ragtime genius in the U.S. Army, and a Belgian orphan with a gorgeous voice and a devastating past. Their story, as told by goddess Aphrodite, who must spin the tale or face judgment on Mount Olympus, is filled with hope and heartbreak, prejudice and passion, and reveals that, though War is a formidable force, it's no match for the transcendent power of Love.
Hailed by critics, Lovely War has received seven starred reviews and is an indie bestseller. Author Julie Berry has been called "a modern master of historical fiction" by Bookpage and "a celestially inspired storyteller" by the New York Times, and Lovely War is truly her masterwork.