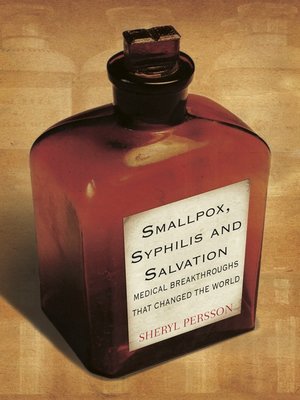 Smallpox, Syphilis and Salvation is a highly accessible, engaging look at modern medicine. Since ancient times, mankind has searched for ways to defeat disease. It has only been in the last 200 years that scientists have made major inroads in medical science, and as a result, many, many lives have been, and continue to be, saved.

From intense rivalries and vanity to bitter jealousies and subterfuge, Smallpox, Syphilis and Salvation documents the personal tales of medical discovery in the twentieth century.

The anecdotes are lively, and include mini-biographies of some extraordinary individuals who have defined modern medicine, from Edward Jenner to Louis Pasteur to Jonas Salk to Gertrude Elion. The stories behind the miracle discoveries are truly fascinating; it is intriguing to witness human frailty interfering in even the noblest of causes, and to understand if these great minds had been driven by altruism, ambition and ego or by the thrill of scientific discovery for its own sake.

Since ancient times the search for cures for the great scourges that have afflicted human kind has been an ongoing quest, but it is only within the last 200 years that major breakthroughs have occurred and the development of modern medicine has accelerated. The stories behind these great cures are those of rivalries, jealousies, public humiliation, dedication, subterfuge, and great personal struggles.

Often these medical advances have truly changed the world. For example, when Edward Jenner developed the concept of vaccination, and with it the cure for smallpox, he found a way to defeat a disease that had affected half a billion people — more than all those affected by wars and other epidemics combined.

In Smallpox, Syphilis and Salvation we look at the compelling stories of the men and women, innovations and accidents that have led to diseases from polio to syphilis, the black plague to diabetes, tuberculosis to leukaemia no longer being the death sentence they once were. We also sound a note of warning — for some of these diseases are fighting back and in the future may once again take their toll on the world's population.