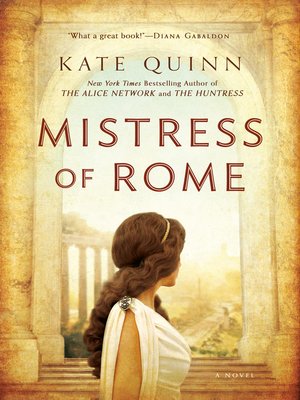 The Empress of Rome Saga

View more libraries...
The first in an unforgettable historical saga from the New York Times bestselling author of The Alice Network and The Diamond Eye.

“So gripping, your hands are glued to the book, and so vivid it burns itself into your mind’s eye and stays with you long after you turn the final page.”—Diana Gabaldon, #1 New York Times bestselling author

First-century Rome: One young woman will hold the fate of an empire in her hands.
Thea, a captive from Judaea, is a clever and determined survivor hiding behind a slave’s docile mask. Purchased as a toy for the spoiled heiress Lepida Pollia, Thea evades her mistress’s spite and hones a secret passion for music. But when Thea wins the love of Rome’s newest and most savage gladiator and dares to dream of a better life, the jealous Lepida tears the lovers apart and casts Thea out.
Rome offers many ways for the resourceful to survive, and Thea remakes herself as a singer for the Eternal ’City’s glittering aristocrats. As she struggles for success and independence, her nightingale voice attracts a dangerous new admirer: the Emperor himself. But the passions of an all-powerful man come with a heavy price, and Thea finds herself fighting for both her soul and her destiny.
Many have tried to destroy the Emperor: a vengeful gladiator, an upright senator, a tormented soldier, a Vestal Virgin. But in the end, the life of Rome’s most powerful man lies in the hands of one woman: the Emperor’s mistress.

The Empress of Rome Saga