The World of Relaxation 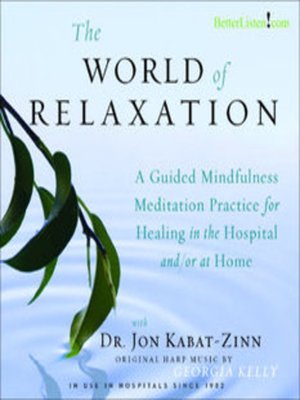 This program was released in 1982 and re-mastered in 2009. For that reason, on this audio version, Jon Kabat-Zinn sounds much younger than he does now. He was 38 at the time. The World of Relaxation was and still is a novel and radical use of media, aimed at reaching out to patients lying in bed in the hospital and inviting them to experiment inwardly, with Jon's guidance, in bringing mindful awareness to their present-moment circumstances, utilizing the occasion of having to lie in bed for some time — whatever the listener's medical condition and prognosis — to do something for him or herself to promote healing of the mind and body, as a vital complement to whatever the health care system and one's doctors are doing by way of medical treatments and rehabilitation. Over one hundred hospitals have used this program over the years on their in-house television channels, and doctors often prescribe it to their patients, recommending that they practice with it several times a day. The program is meant to be "done" by the listener, rather than "viewed" or listened to. During most of the time, the listener is encouraged to have his or her eyes closed.

In the past 30 years, Dr. Kabat-Zinn's eight-week out-patient mindfulness-based stress reduction (MBSR) program has spread from the University of Massachusetts Memorial Medical Center to hospitals and clinics across the United States and around the world and occasioned an entire field of clinical medicine and basic and clinical research, much of which has already demonstrated the profoundly positive mental and physical health consequences of practicing mindfulness meditation both formally and informally in one's daily life. The practices in The World of Relaxation are guided meditations similar to the formal practices in MBSR, particularly mindfulness of breathing, body sensations, thoughts and emotions, and the body scan.

The original harp music by Georgia Kelly was composed specifically for this program and is played by the composer. Harp music has been associated with healing since pre-biblical times. The music enhances the process of relaxation and establishes a flowing rhythmicity that entrains the listener's attention and carries it through the various stages of the program. The notes of the harp have the quality of coming out of silence and disappearing back into silence, singly and in raining curtains of sounds, just as do our thoughts and emotions. Mindfulness, one's capacity to inhabit the present moment with non-judgmental awareness, deepens over the course of a single session and even more, through repeated practicing with this program over days, weeks, months and years. The learning occasioned by practicing with this program on a regular basis can stand one in good stead from moment to moment and from day to day as one's life continues to unfold.