ebook ∣ The Thief, The Queen of Attolia, The King of Attolia, A Conspiracy of Kings, Thick as Thieves · Queen's Thief 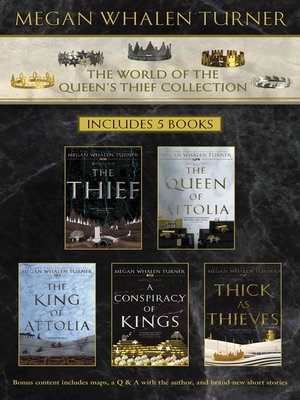 Discover and rediscover the world of the Queen's Thief, from the acclaimed series launch The Thief to the thrilling, twenty-years-in-the-making conclusion, The Return of the Thief.

Discover and rediscover the world of the Queen's Thief in this digital collection that includes the first five novels in the series: The Thief, The Queen of Attolia, The King of Attolia, A Conspiracy of Kings, and Thick as Thieves.

Bonus Content: two maps, a complete cast of characters, three original short stories, a Q&A with the author, and a peek at Megan Whalen Turner's inspiration for the setting of the novels.

When Eugenides the thief's boasting lands him in prison and the king's magus invites him on a quest to steal a legendary object, he is in no position to refuse.

The Queen of Attolia

Eugenides's final excursion does not go as planned, and he is captured by the ruthless queen.

The King of Attolia

The fate of three nations hangs in the balance as Eugenides endures the pranks, insults, and intrigue of the Attolian court with dwindling patience

A Conspiracy of Kings

After an attempted assassination and kidnapping, Eugenides and the Queen of Eddis are left to wonder if Sophos, heir to the throne of Sounis, is alive, and if they will ever see him again.

Kamet, a secretary and slave, has the ambition and the means to become one of the most powerful people in the Empire. But with a whispered warning the future he envisioned is wrenched away, and he is forced onto a very different path.