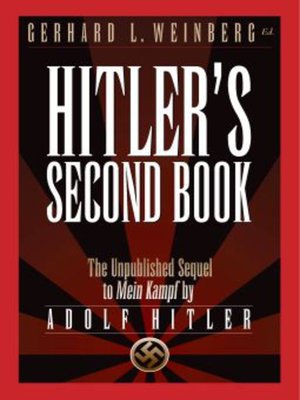 "Provides a valuable insight into the development of ideas that were to shape Hitler's foreign policy after 1933."—Jeremy Noakes, The Times Literary Supplement

“The text bears all of Hitler's hallmarks, along with a terrifying, sustained belief in war and violence as a means to ensure that Germany would flourish."—Publishers Weekly

“He envisaged the German people becoming involved in a series of wars for Lebensraum culminating in an epic battle against America."—Michael Smith, Daily Telegraph

“The Second Book is in many ways more important than Mein Kampf."—Guardian

“I have never known anyone to say this is a forged document."—Volker Berghahn, The New York Times

“More clearly than ever, Hitler sketched out the worldwide struggle against the Jews which he and his party had to lead."—Richard Overy, Guardian

Hitler's Second Book is the first complete and annotated edition of the manuscript Hitler dictated shortly before his rise to power four year after publishing Mein Kampf. It contains a catalog of shocking policy statements and previously undisclosed plans of world conquest at the core of Nazi ideology that Hitler concluded were too provocative for publication.