Scholars, Witches and Other Freedom Fighters 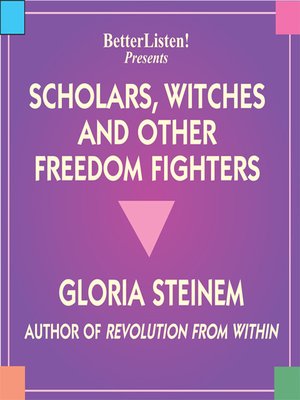 This talk by Gloria Steinem — timely, timeless, and recommended for all genders — is a never before released recording that took place in 1993 in Salem, Massachusetts, in concurrence with the 300th anniversary of The Salem Witch Trials. In this incredibly enlightening and motivational audio program, Steinem puts into social and historical context the role of society in the treatment and mistreatment of women. Excerpt from recording: "As you can tell from the title I had given to my speech, "Scholars, Witches and Other Freedom Fighters," ... I couldn't resist reflecting on the reasons that both are freedom fighters, even though scholars are serene, non-activist, honorable, and respectable and witches are emotional, activist and all-together dishonorable. In other words, the first are masculine in their imagery and the second are feminine in their imagery. But both have a role to play as revolutionaries and freedom fighters for us all."