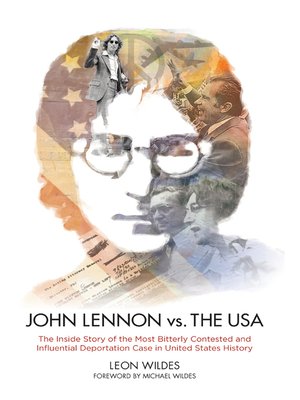 At a time when the hottest issue in US immigration law is the proposed action by President Obama to protect from deportation as many as 5 million illegals in the United States, the 1972 John Lennon deportation case takes on special relevance today, notwithstanding the passage of forty years since he was placed in deportation proceedings.

For the first time, noted New York immigration attorney Leon Wildes tells the incredible story of this landmark case - John Lennon vs. The USA - that set up a battle of wills between John Lennon, Yoko Ono, and President Richard Nixon. Although Wildes did not even know who John Lennon and Yoko Ono were when he was originally retained by them, he developed a close relationship with them both during the eventual five-year period while he represented them and thereafter. This is their incredible story.

Leon Wildes (New York, NY) is the founding member and senior partner of Wildes & Weinberg P.C., a distinguished immigration law firm in New York City, and has practiced immigration law since 1960. In 1970, he served as National President of the American Immigration Lawyers Association, a bar association for immigration lawyers. He is the recipient of the AILA's Edith Lowenstein Award for Outstanding Contributions to the Field of Immigration Law. A prolific writer, Wildes has published many articles on aspects of immigration law including five law review articles (in the San Diego Law Review and Brooklyn Law Review) concerning the Lennon case litigation and has spoken before numerous legal and other groups. He was featured in the documentary film "The US versus John Lennon" and did promotional interviews for the film.