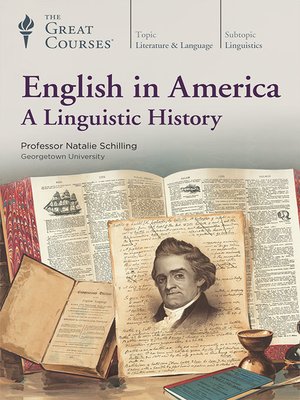 Think about this: How would you address a group of two or more people? Would you say "you", "you all", "yous", "you lot", "y'all", "you guys", "you'uns", "yinz", or something else? Would that change depending on whom you were talking to or where you were? Your answers can provide revealing insights into who you are, where you grew up or live now, and your social, economic, and educational background.Welcome to the enthralling world of linguistics. If you've ever been curious about how words like awesomesauce ever came to be, let alone made it into the Oxford English Dictionary, or if you've wondered why you say "firefly" and someone else calls the same insect a "lightning bug", English in America is for you.There's an incredibly rich and colorful history behind American English. A profoundly diverse assortment of cultures has influenced our vocabulary, pronunciation, and grammar, and the language continues to grow and shift. Dialect variations are widespread and actually increasing, and the new words, accents, and sentence structures both reflect and shape changes in our culture and society. Investigating these dialects is the domain of sociolinguistics, the study of the intricate interrelation between language variation and cultural, interpersonal, and personal identity.Over 24 lectures, you'll encounter a wide range of ethnic and social groups that have shaped the course of the development of American English over the centuries: English speakers from all over the British Isles; speakers of West African languages; immigrants from Western and Eastern Europe; speakers of languages from Asia; and Spanish speakers from all over the world. In considering the contributions of these groups, you'll also gain deep insights into the perceptions - and misperceptions - about language and dialect variation. As you'll discover, American English is an umbrella term for many different EnglishES, reflecting who we have always been as a nation.