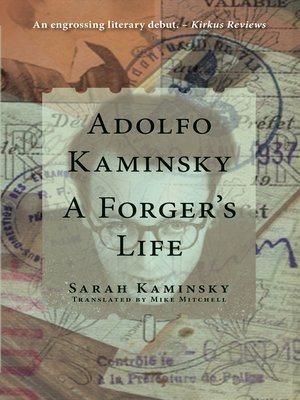 The gripping true story of a life-long forger working for the French Resistance and clandestine organizations, told to his daughter.

Subject of The New York Times documentary "The Forger,"; winner of a World Press Photo Award and an Emmy Award
As seen on 60 Minutes with Anderson Cooper
"[An] engrossing literary debut. ... Writing in Adolfo's voice gives this suspenseful narrative candor and immediacy." - Kirkus Reviews
Reader's Choice Award –Elle Magazine, France
Wall Street Journal's Top 10 Most Anticipated Non-Fiction: Fall Books 2016
"Every resistance movement had its forgers, but few have told their tales. Many, like Kaminsky, were very young technicians and chemists when they began their work. Sarah Kaminsky's affectionate rendering of her father's life, with all the intricacies of his trade, is a book not just about a remarkable craftsman, but a man who strove to save 'every life that was in danger.'"

-Times Literary Supplement
Best-selling author Sarah Kaminsky takes readers through her father Adolfo Kaminsky's perilous and clandestine career as a forger for the French Resistance, the FLN, and numerous other freedom movements of the twentieth century. Recruited as a young Jewish teenager for his knowledge of dyes, Kaminsky became the primary forger for the French Resistance during the Nazi occupation of Paris. Then, as a professional photographer, Kaminsky spent the next twenty-five years clandestinely producing thousands of counterfeit documents for immigrants, exiles, underground political operatives, and pacifists across the globe. Kaminsky kept his past cloaked in secrecy well into his eighties, until his daughter convinced him to share the details of the life-threatening work he did on behalf of people fighting for justice and peace throughout the world.