ebook ∣ Fighting for Civil and Voting Rights in Mississippi and Illinois

By Martha A. Mills 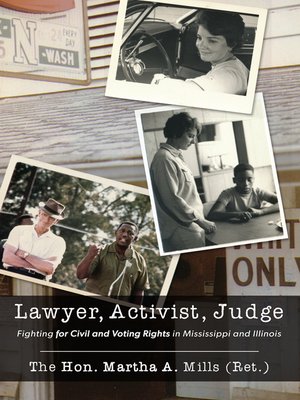 In this engaging description of life spent breaking down barriers, Martha Mills describes being one of few female law students in the early 1960s, finding work as the first female in a law firm, and joining the work of the Lawyers' Committee for Civil Rights Under Law in the mid-1960s. Her work as a civil rights activist continued through to her work as a judge in Cook County, Illinois. Martha Mills came to Mississippi as a young civil rights lawyer and looked racist judges, lawyers, lawmen and Ku Kluxers in the eye-never backing down, in court or out. Mills would not be intimidated. Lawyer, Activist, Judge: Fighting for Civil and Voting Rights in Mississippi and Illinois is an inside look at the struggle for civil and voting rights in Mississippi and Cairo, IL in the 1960s-70s from a trial lawyer's vantage point. The book takes a look at some major cases, including a million dollar verdict against the Ku Klux Klan, milestone Supreme Court cases involving the 1871 Civil Rights Act and the 1965 Voting Rights Act, and more. She lived and worked in an ardent segregationist culture fraught with danger, and filled with both heroes and villains. The history and early struggles under the Voting Rights Act of 1965 are of crucial importance to those who will today litigate renewed attempts to limit the ability of persons of various classes to vote, blacks, minorities, the poor, the young and the poorly educated.