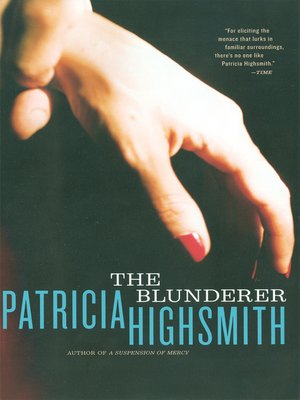 "Highsmith's novels are peerlessly disturbing...bad dreams that keep us thrashing for the rest of the night." —The New Yorker

For two years, Walter Stackhouse has been a faithful and supportive husband to his wife, Clara. She is distant and neurotic, and Walter finds himself harboring gruesome fantasies about her demise. When Clara's dead body turns up at the bottom of a cliff in a manner uncannily resembling the recent death of a woman named Helen Kimmel who was murdered by her husband, Walter finds himself under intense scrutiny. He commits several blunders that claim his career and his reputation, cost him his friends, and eventually threaten his life. The Blunderer examines the dark obsessions that lie beneath the surface of seemingly ordinary people. With unerring psychological insight, Patricia Highsmith portrays characters who cross the precarious line separating fantasy from reality.