ebook ∣ The True Story of the Manson Murders 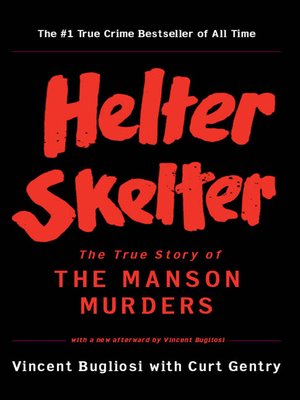 In the summer of 1969, in Los Angeles, a series of brutal, seemingly random murders captured headlines across America. A famous actress (and her unborn child), an heiress to a coffee fortune, a supermarket owner and his wife were among the seven victims. A thin trail of circumstances eventually tied the Tate-LeBianca murders to Charles Manson, a would-be pop singer of small talent living in the desert with his "family" of devoted young women and men. What was his hold over them? And what was the motivation behind such savagery? In the public imagination, over time, the case assumed the proportions of myth. The murders marked the end of the sixties and became an immediate symbol of the dark underside of that era.

Vincent Bugliosi was the prosecuting attorney in the Manson trial, and this book is his enthralling account of how he built his case from what a defense attorney dismissed as only "two fingerprints and Vince Bugliosi." The meticulous detective work with which the story begins, the prosecutor's view of a complex murder trial, the reconstruction of the philosophy Manson inculcated in his fervent followers...these elements make for a true crime classic. Helter Skelter is not merely a spellbinding murder case and courtroom drama but also, in the words of The New Republic, a "social document of rare importance."

Some images in this ebook are not displayed due to permissions issues.