It IS About Islam 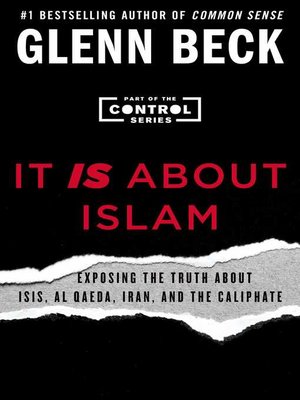 View more libraries...
Glenn Beck, the New York Times bestselling author of The Great Reset, exposes the real truth behind the roots of Islamic extremism in Muslim teachings in this sharply insightful handbook that debunks commonly held assumptions about Islam and the dream of a renewed caliphate.
From the barbarians of ISIS to the terror tactics of Al-Qaeda and its offshoots, to the impending threat of a nuclear Iran, those motivated by extreme fundamentalist Islamic faith have the power to endanger and kill millions. The conflict with them will not end until we face the truth about those who find their inspiration and justification in the religion itself.

Drawing on quotes from the Koran and the hadith, as well as from leaders of ISIS, Al Qaeda, and the Muslim Brotherhood, Glenn Beck seeks to expose the true origins of Islamic extremism as well as the deadly theological motivations behind these agencies of destruction.

Using the same unique no-holds-barred style from his bestselling books Control and Conform, Glenn Beck offers straight facts and history about the fundamental beliefs that inspire so many to kill.