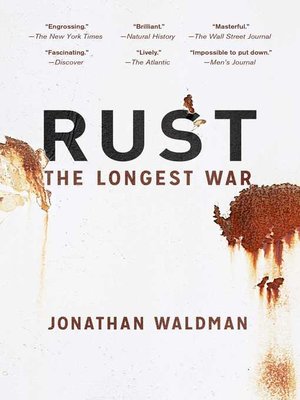 Rust has been called "the great destroyer," the "pervasive menace," and "the evil." "This look at corrosion—its causes, its consequences, and especially the people devoted to combating it—is wide-ranging and consistently engrossing" (The New York Times).
It is the hidden enemy, the one that challenges the very basis of civilization. This entropic menace destroys cars, fells bridges, sinks ships, sparks house fires, and nearly brought down the Statue of Liberty's torch. It is rust—and this book, full of wit and insight, disasters and triumphs—is its story.

"Jonathan Waldman's first book is as obsessive as it is informative...he takes us deep into places and situations that are too often ignored or unknown" (The Washington Post). In Rust, Waldman travels from Key West to Prudhoe Bay, meeting people concerned with corrosion. He sneaks into an abandoned steelworks and nearly gets kicked out of Can School. He follows a high-tech robot through an arctic winter, hunting for rust in the Alaska pipeline. In Texas, he finds a corrosion engineer named Rusty, and in Colorado, he learns of the animosity between the galvanizing industry and the paint army. Along the way, Waldman recounts stories of flying pigs, Trekkies, rust boogers, and unlikely superheroes.

The result is a man-versus-nature tale that's as fascinating as it is grand, illuminating a hidden phenomenon that shapes the modern world. Rust affects everything from the design of our currency to the composition of our tap water, and it will determine the legacy we leave on this planet. This exploration of corrosion, and the incredible lengths we go to fight it, is "engrossing...brilliant...Waldman's gift for narrative nonfiction shines in every chapter....Watching things rust: who would have thought it could be so exciting" (Natural History).