ebook ∣ Disaster, Mutiny, and the Fight for Civil Rights 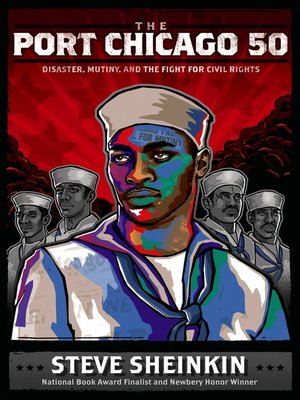 A National Book Award Finalist
A YALSA Award for Excellence in Nonfiction Finalist
A School Library Journal Best Book of the Year
On July 17, 1944, a massive explosion rocked the segregated Navy base at Port Chicago, California, killing more than 300 sailors who were at the docks, critically injuring off-duty men in their bunks, and shattering windows up to a mile away. On August 9th, 244 men refused to go back to work until unsafe and unfair conditions at the docks were addressed. When the dust settled, fifty were charged with mutiny, facing decades in jail and even execution.
The Port Chicago 50 is a fascinating story of the prejudice and injustice that faced black men and women in America's armed forces during World War II, and a nuanced look at those who gave their lives in service of a country where they lacked the most basic rights.
This thoroughly-researched and documented book can be worked into multiple aspects of the common core curriculum, including history and social studies.
"Sheinkin delivers another meticulously researched WWII story, one he discovered while working on his Newbery Honor book, Bomb...Archival photos appear throughout, and an extensive bibliography, source notes, and index conclude this gripping, even horrific account of a battle for civil rights predating Rosa Parks and Martin Luther King, Jr." —Publishers Weekly (starred review)
Also by Steve Sheinkin:
Bomb: The Race to Build—and Steal—the World's Most Dangerous Weapon
The Notorious Benedict Arnold: A True Story of Adventure, Heroism & Treachery
Undefeated: Jim Thorpe and the Carlisle Indian School Football Team
Most Dangerous: Daniel Ellsberg and the Secret History of the Vietnam War
Which Way to the Wild West?: Everything Your Schoolbooks Didn't Tell You About Westward Expansion
King George: What Was His Problem?: Everything Your Schoolbooks Didn't Tell You About the American Revolution
Two Miserable Presidents: Everything Your Schoolbooks Didn't Tell You About the Civil War
Born to Fly: The First Women's Air Race Across America