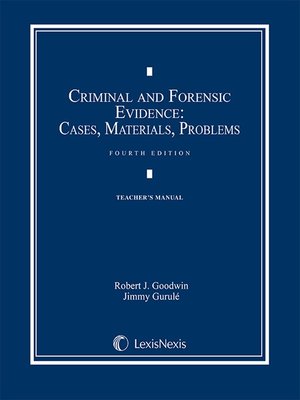 TEACHER'S MANUAL for Criminal and Forensic Evidence: Cases, Materials, Problems Fourth Edition This unique casebook adopts a modern, comprehensive approach to the study of evidence issues that arise in the context of criminal trial litigation. It covers evidentiary issues associated with the admission of forensic evidence, including expert testimony, as well as traditional evidence issues, such as evidence of prior bad acts offered for purposes other than to prove propensity, and evidence of a rape victim's prior sexual behavior. The materials are presented in two parts that allow for a Criminal Evidence course focused solely on forensic science, solely on traditional criminal evidentiary issues, or a combination of both topics. The Fourth Edition represents a major revision of the casebook. Virtually every chapter has been updated with new and more recent cases and materials. A total of twenty-six new cases have been added to the fourth edition, followed by comprehensive notes and questions. Some of the main updates: Chapter 5, Evidence Based on Research in Social and Behavioral Science, includes several new cases on the admissibility of expert testimony on eyewitness identification, rape trauma syndrome, child sex abuse syndrome, and battered woman syndrome. Chapter 8, Hearsay Where the Availability of the Declarant is Immaterial, includes three recent U.S. Supreme Court cases: Bullcoming v. New Mexico (2011), Michigan v. Bryant (2011), and Williams v. Illinois (2012). Additionally, a case recently decided by the California Supreme Court discussing the implications of Williams has been added to the new edition. Chapter 10, Impeachment, has been substantially revised with the addition of several new cases on impeachment by prior conviction, misconduct not resulting in a conviction, and opinion testimony regarding the truthfulness of a government witness, as well as impeachment by contradiction. Chapter 11, Photographs, Videotapes, Audio Recordings, and Demonstrations, includes new cases on the admission of graphic autopsy photographs, the foundational requirements for the admission of videotape recordings, and a new section discussing the admission of computer-generated evidence, e.g., computer animations and computer simulations.