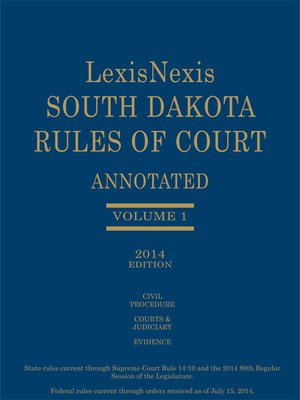 This two-volume set includes all rules of practice and procedure from Titles 15, 16, 19 and 23A, as approved by the South Dakota Supreme Court and codified by the South Dakota Legislature. Also included are the: - Local Rules of Practice of the United States District Court for the District of South Dakota--Criminal, Civil - Rules for the United States Court of Appeals for the Eighth Circuit, including an integration of the Federal Rules of Appellate Procedure where adopted by the Eighth Circuit - United States Bankruptcy Court District of South Dakota - Indian Child Welfare Act of 1978 (25 U.S.C., sec. 1901 to 196) as well as Guidelines for State Courts: Indian Child Custody Proceedings Department of the Interior, Bureau of Indian Affairs Both volumes are heavily annotated with case notes derived from decisions of the South Dakota Supreme Court and appropriate Federal Courts. This eBook features links to Lexis Advance for further legal research options.