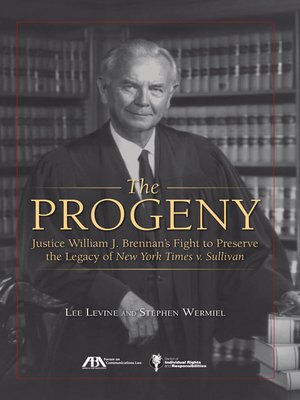 New York Times Co. v. Sullivan, credited with defining the central meaning of the First Amendment, has protected the freedom of expression for the past 50 years. This compelling work of historical non-fiction focuses on the progeny of that decision examining how Justice Brennan nurtured and developed the constitutional law of defamation and related claims from this important milestone. The book draws on the previously unreported papers of Justice Brennan and several of his colleagues and, through them as well as author Stephen Wermiel's private interviews with Brennan, provides the authoritative historical account of how an important body of constitutional law came to be. In so doing, The Progeny offers fresh insights with respect to both what the law means and the process by which it was formulated. This text tells a compelling story in which the Brennan and his fellow justices are the lead characters. It is your window into a process that has rarely been open previously. The authors deconstruct the internal machinations that resulted in the historic line of cases that now governs the law of defamation as well as closely related claims such as invasion of privacy and intentional infliction of emotional distress. In addition to New York Times v. Sullivan, this work examines the following well known cases: • Gertz v. Robert Welch, Inc. • Hustler Magazine v. Falwell • Bartnicki v. Vopper • and many more! Given Sullivan’s enormous impact on the development of our rights to freedom of speech and press, this book is a must read for Supreme Court watchers, journalists, fans of legal history, constitutional scholars and, of course, First Amendment enthusiasts.