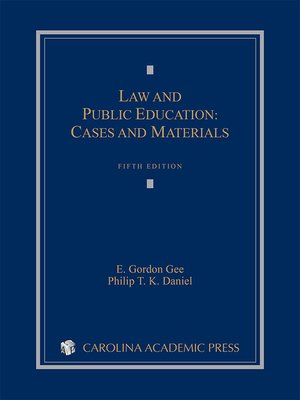 Although primarily a legal work, Law and Public Education also addresses historical, pedagogical, economic, and other social science literature. Coverage of the cases and other materials is more complete than in many other casebooks, as it is important for the student to master the complexities, ambiguities, and nuances of meaning that would be missed with too much editing. Three primary themes are addressed: • The decision-making process and the proper allocation of decision-making power among those who compete for it; • The conflicts involved in a liberal, democratic society seeking to inculcate values in its young; and • The tensions that pervade a nation and an educational system torn between values of national unity, secularism, and universalism on the one hand and the desire to preserve pluralism and enhance sectarian and parochial subgroup cultures on the other. All three branches of government play a significant role in shaping and influencing the enterprise of American public education. The federal government has reformed education policy significantly in the past several decades and much of the decision-making undertaken by local and state school officials continues to be litigated in the courts. This eBook features links to Lexis Advance for further legal research options.