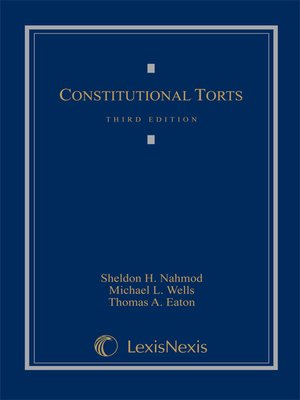 •   Constitutional Torts includes both the most recent Supreme Court opinions and extensive coverage of lower court decisions. Studying circuit and district court decisions is crucial to understanding the developing law of §1983, because (a) they show how general principles of law pronounced by the Supreme Court are actually applied; (b) the Supreme Court rarely visits some important aspects of the doctrine; and (c) in this dynamic area of the law, the lower courts are the first to identify new issues and new ways of approaching old problems.

•   Constitutional Torts gives expanded coverage of the substantive constitutional claims that provide the basis for most §1983 claims. For example, it includes materials addressing the content of the terms "liberty" and "property" in the Fourteenth Amendment, the First Amendment retaliation claims of government employees, and the Fourth, Fourteenth, and Eighth Amendment claims of persons alleging they were victims of excessive force by law enforcement officials. It is especially important to cover these materials in a §1983 book, since they are largely ignored in standard constitutional law casebooks.

•   At the same time, the materials continue to emphasize the "tort" aspects of §1983 litigation, especially with regard to affirmative duties, causation, official immunity, and damages. These materials illuminate both the similarities and differences between constitutional torts and analogous principles developed in the common law tort setting. By studying both tort and constitutional principles, students learn how to argue for and against the application of common law tort principles to constitutional tort issues, and will come to understand both the theoretical and practical consequences of the constitutional underpinnings of the litigation.

•   Constitutional Torts offers exceptionally comprehensive coverage of remedial issues. It provides a thorough treatment of compensatory damages, punitive damages, injunctive relief, and attorneys' fees. These materials not only explain the basic doctrine, but explore their strategic implications on the conduct of litigation.