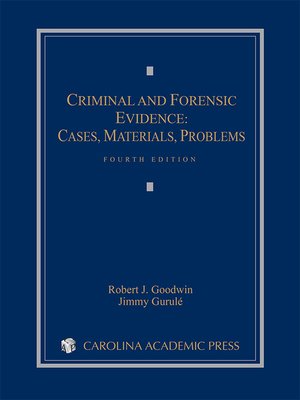 This unique casebook adopts a modern, comprehensive approach to the study of evidence issues that arise in the context of criminal trial litigation. It covers evidentiary issues associated with the admission of forensic evidence, including expert testimony, as well as traditional evidence issues, such as evidence of prior bad acts offered for purposes other than to prove propensity, and evidence of a rape victim's prior sexual behavior. The materials are presented in two parts that allow for a Criminal Evidence course focused solely on forensic science, solely on traditional criminal evidentiary issues, or a combination of both topics.

The Third Edition provides students the most current and comprehensive examination of the Supreme Court's Sixth Amendment Confrontation Clause jurisprudence emanating from its recent decisions in Crawford v. Washington, Davis v. Washington, Giles v. California, and Melendez-Diaz v. Massachusetts. The new edition includes an extensive analysis of how federal and state courts post-Crawford have applied the Supreme Court's "testimonial" evidence and "primary purpose" tests for determining whether the admission of hearsay statements violates the Sixth Amendment right of confrontation.

•  How courts have applied the Daubert test in criminal cases to determine the admissibility of both scientific and non-scientific forensic techniques;

•  debate over the reliability and admissibility of traditional forensic techniques such as fingerprint evidence;

•  issues related to the admissibility of DNA evidence; and

•  The admissibility of syndrome and profile evidence, including rape trauma, child abuse and battered woman syndromes.