The Law of Disability Discrimination Handbook 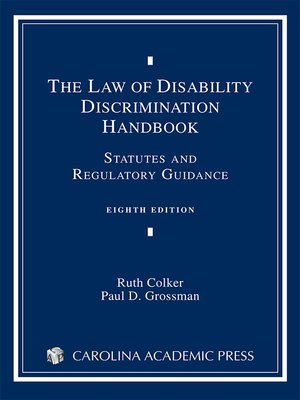 The purpose of this book is to provide students with an in-depth understanding of the ADA, including the sections governing employment (Title I), public entities (Title II), and public accommodations (Title III). The book focuses on the major components of the ADA, with extensive reference to the implementing regulations and accompanying guidance statements--essential building blocks for a complete understanding of the Act. It also covers a wide range of additional topics, such as education, housing, insurance, and the protection of newborns with disabilities. Because the ADA intersects several other federal statutes, such as the IDEA, the FHAA, and Section 504 of the Rehabilitation Act, cross-references to these and other statutes are frequently provided.

A companion book, The Law of Disability Discrimination Handbook: Statutes and Regulatory Guidance, includes reference material relevant to interpreting federal law prohibiting discrimination on the basis of disability. The Handbook includes the statutory language of each of the five Titles of the ADA. In addition, with respect to Titles I, II, and III, the Handbook includes the regulations and interpretive guidance promulgated by the EEOC and the United States DOJ. The Handbook also includes reference material relevant to interpreting Section 504 of the Rehabilitation Act of 1973 and the Fair Housing Act Amendments of 1998, as well as excerpts from the Civil Rights Act of 1991. Further, the Handbook contains the text of the IDEA, the Department of Education Regulations implementing the IDEA, and the Convention on the Rights of Persons with Disabilities.