Field Notes From a Catastrophe 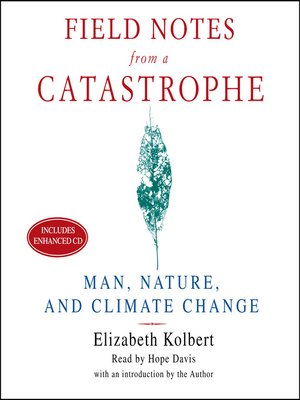 View more libraries...
Americans have been warned since the late 1970s that the buildup of carbon dioxide in our atmosphere threatens to melt the polar ice sheets and irreversibly change our climate. With little done since then to alter this dangerous path, the world has reached a critical threshold. By the end of the century, it will likely be hotter than at any point in the last two million years, and the sweeping consequences of this change will determine the future of life on earth for generations to come.

Taking listeners from the melting Alaskan permafrost to storm-torn New Orleans, acclaimed journalist Elizabeth Kolbert approaches this monumental problem from every angle. She interviews researchers and environmentalists, explains the science, draws frightening parallels to lost civilizations and presents the moving tales of people who are watching their worlds disappear. Growing out of an award-winning three-part series for the New Yorker, Field Notes from a Catastrophe brings the environment into the consciousness of the American people and asks what, if anything, can be done to save our planet.