ebook ∣ How Our Daily Habit Helps, Hurts, and Hooks Us 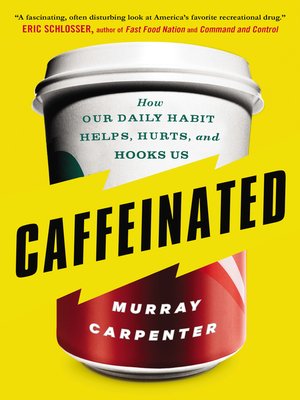 Journalist Murray Carpenter has been under the influence of a drug for nearly three decades. And he’s in good company, because chances are you’re hooked, too. Humans have used caffeine for thousands of years. A bitter white powder in its most essential form, a tablespoon of it would kill even the most habituated user. This addictive, largely unregulated substance is everywhere—in places you’d expect (like coffee and chocolate) and places you wouldn’t (like chewing gum and fruit juice), and Carpenter reveals its impact on soldiers, athletes, and even children. It can make you stronger, faster, and more alert, but it’s not perfect, and its role in health concerns like obesity and anxiety will surprise you.
Making stops at the coffee farms of central Guatemala, a synthetic caffeine factory in China, and an energy shot bottler in New Jersey, among numerous other locales around the globe, Caffeinated exposes the high-stakes but murky world of caffeine, drawing on cutting-edge science and larger-than-life characters to offer an unprecedented understanding of America’s favorite drug.