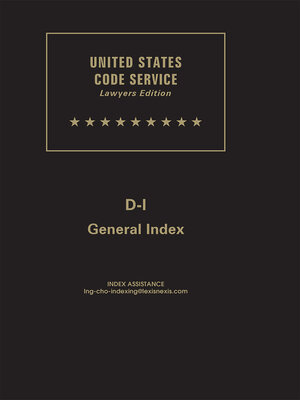 The U.S. Code is the heart and soul of any legal library in the United States.

If you've made the decision to purchase a U.S. Code set, it makes sense to get the most comprehensive, authoritative, current, and easy-to-use set for your investment: the United States Code Service (USCS) from LexisNexis. There is simply nothing else that approaches the value and utility that this set provides.

Base your case on the winning language of the Statutes at Large, the exact language passed by Congress.

The comprehensive, authoritative and easy to use foundation of your law library.

Your subscription to the United States Code Service from LexisNexis gives you the legal framework you need to practice successfully in any jurisdiction and field in the United States. Inside you'll find the 51 titles of the U.S. Code, the U.S. Constitution, the Federal Court Rules, selected provisions of the Code of Federal Regulations, as well as a selection of treaties and international agreements, all fully annotated by our expert staff of attorney-editors and contributors who are well-known experts in their fields. Case notes go beyond the National Reporter System, including opinions from the IRS, Social Security Administration, Consumer Product Safety Commission and more that appear in specialty reporters like CCH and BNA, and they are organized by issue to make it easier for you to find new case law. Most importantly, our attorney-editors write case notes only for decisions that offer actual interpretation, application, or construction of a Code section or Court Rule, so you'll never have to spend valuable time pouring through irrelevant case notes.

Expand your research and stay current.

When you subscribe to the United States Code Service (USCS) from LexisNexis, you can be confident that you're building your practice on a solid foundation. No other code set — including the USCA — offers such outstanding value.