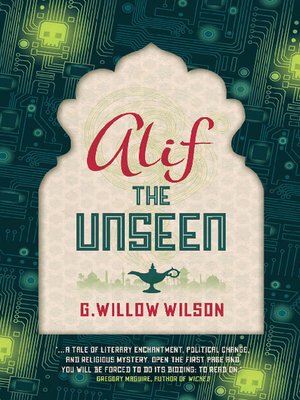 When a young Arab-Indian hacker - who protects watched groups from surveillance - discovers The Thousand and One Days, the secret book of the jinn, he finds himself in a life and death struggle against forces seen and unseen. A cool and sophisticated page-turner that will enchant readers who love the works of Philip Pullman and Neil Gaiman.

Driven by a hot ionic charge between higher math and Arabian myth, G. Willow Wilson conjures up a tale of literary enchantment, political change, and religious mystery. Open the first page and you will be forced to do its bidding: To read on.' - Gregory Maguire, author of Wicked and Out of Oz

Welcome to the Empty Quarter, the domain of Djinn, ghouls, demons and the effrit who take the shapes of beasts. You used to walk among us, and we among you. Now things are different. Now we are Unseen.

Alif is a 23-year-old Arab/Indian hacker working in the Arab Emirates. His job is to provide security to enemies of the Arab states, ranging from pornographers to militant Islamists. Alif has fallen in love with the beguiling Intisar, an aristocratic woman he meets online. But their budding love affair is cruelly ended when her father arranges a marriage for her with a man of her class... a man who turns out to be the state's leading censor, a shadowy and powerful figure known only as 'the Hand'. The state security forces come after Alif with guns drawn, and he must go underground, trying all the while to fight back against a piece of code he wrote to protect his lover but which the Hand is using to create the most sophisticated state surveillance the world has ever known.

As their final communication, Intisar sends the heartbroken Alif a mysterious old book. Bound in what looks like human skin, and titled The Thousand and One Days, Alif soon realizes that this token of affection is actually a dangerous source of old world magic. And as the keeper of this amulet - the secret book of the jinn - Alif is about to become a wanted fugitive from both the corporeal and the celestial worlds...A life and death struggle ensues as the might of heaven and earth is unleashed.