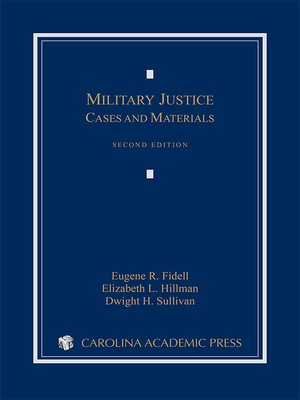 Military Justice: Cases and Materials gives teachers a new and powerful tool to introduce students to military law while deepening their understanding of criminal law and procedure, comparative law, international law, and constitutional law. At a time when the tempo of military operations around the world seems to increase constantly and high-profile courts-martial dominate the headlines, this book gives students and teachers unprecedented the tools needed to analyze, understand, and evaluate worldwide military justice.

With prosecutions arising from prisoner abuse, atrocities against civilians, and servicemembers’ opposition to ongoing wars, the military justice system now has a prominence unmatched since the Vietnam era. This higher profile for courts-martial, combined with the difficult and fundamental legal issues raised by the military commissions, suggests that military courses will now be in great demand. This casebook provides the text for such a course. Its coverage of the U.S. court-martial and other systems of military criminal law provides a framework through which students can explore the role and operation of military justice within a democratic society. In an era of worldwide deployments, multi-national operations, and global terrorism, this book illuminates the interconnectedness of military justice systems through a far-ranging collection of judicial opinions, statutes, regulations, commentaries, and scholarship. While the materials presented draw heavily from the United States, most chapters also present materials from other jurisdictions to enhance students’ appreciation of both the unique American experience and the availability of alternative approaches to military discipline, accountability, and punishment. International norms are also examined.

Part I, Foundations, sets the stage by exploring the origins and purposes of military justice, pointing out the many sources of law that govern this area, analyzing the unique and critical role of the commander in military justice, and assessing professional responsibility rules for military lawyers. Part II, Principles, steps further into legal analysis to study the jurisdiction of military courts, identify crimes and defenses that apply only in a military context, and analyze the extent to which the obligations of military service alter the protection of fundamental rights. Part III, Trials, brings students into the court-martial to meet military judges, juries, and counsel and to study the rules of procedure, evidence, sentencing, and appeal. Part IV, Special Contexts, takes a broader approach to assess the challenges that a military justice system faces during combat and peacekeeping operations. This part also looks at the topic of military commissions. Part V, The Future, gives students a glimpse into the changes that lie ahead by focusing on the processes of legal reform and globalization.