Constitutional Law of the European Union 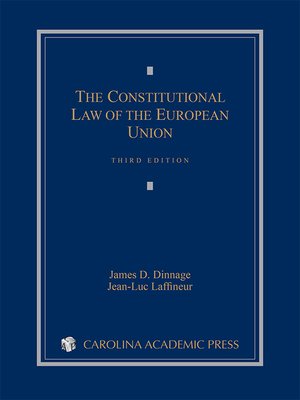 Constitutional Law of the European Union (2012)

Since the second edition was published in 2008, the Treaty of Lisbon has entered into force (December 1, 2009). Lisbon dramatically changed the constitutional structure of the European Union in many ways. As a result, the authors recast the structure of the book. This mainly involved creating a constitutional "template" (This is an entirely new Chapter 1) that reorganizes and simplifies the Treaty texts into a format that lends itself to a conceptual approach based on how we think of constitutions — government, competences, separation of powers, human rights. Chapter 2 then provides a high-level expansion of the provisions set out in the template, The rest of the book expands in detail on that template, introducing (in our view) a fundamentally new and absolutely unique perspective for students and practitioners alike:
what the EU is, in terms of its membership, objectives, institutions and autonomous status (equates to the Preamble to the U.S. Constitution and the supremacy clause); the components of EU law (constitutional sources and legal acts of the Union); the Union legislature (describing the structure, procedures and powers of each of the relevant institutions); executive powers (describing the structure, procedures and powers of each of the relevant institutions); judicial powers (describing the structure, procedures and powers of each of the relevant institutions); the Union's competences; the limitations on the powers of the Member states to ensure the functioning of the internal market (where the case law is summarized, a necessary inclusion given that the actual treaty provisions on their own scarcely convey the true extent of the TFEU's reach in this regard); the position of the individual in relation to Union law (including fundamental rights and incorporation by reference of the Charter of Fundamental Rights); and relations between the Member States.

Constitutional Law of the European Union (2012)