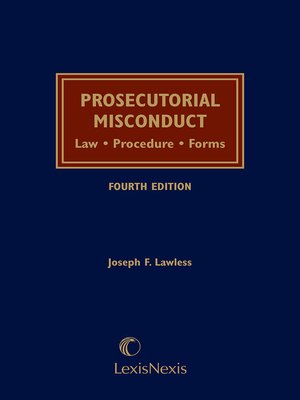 We've all encountered prosecutors who are only interested in improving their "conviction scorecard" and regularly tread on the Bill of Rights in the name of their own ambition. The Duke Lacrosse Team case and the recently dismissed prosecution of U.S. Senator Ted Stevens are merely emblematic of the kind of prosecutorial abuses that have long plagued our system of criminal justice. In the wake of scandals such as Enron, KMPG, ImClone and WorldCom, lawmakers continue to give federal and state prosecutors expanded, unbridled power to investigate and prosecute, fueling this ambition and encouraging prosecutorial abuse.

Now, Philadelphia lawyer Joseph F. Lawless, a former Assistant District Attorney, Special Prosecutor and active criminal defense lawyer, gives you the benefit of his 32 years of experience to help protect your clients from prosecutorial misconduct with this authoritative and practical work. Considered the definitive treatise on the subject, this newest edition of Prosecutorial Misconduct provides a comprehensive and scholarly analysis of every prosecutorial abuse, from the initiation of a criminal investigation through the appeal and post-conviction stages for both federal and state jurisdictions. Unlike other works, however, Prosecutorial Misconduct also provides the defense bar with proven battle plans.

Included in this edition is a complete collection of motions, briefs and arguments from actual cases handled by noted defense lawyers such as David Kendall, Gerry Spence, Billy Martin, James Brosnahan, John Cline, Michael Tigar and Joe Lawless, such as: